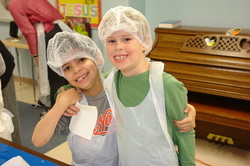 So goes the 1978 lyrics of John Paul Young’s song. Yes, love was very much in the early spring air during the meal packaging event hosted by the faith community of Western Springs Baptist Church on March 11, 2012. Following Sunday service and a fellowship lunch, dozens of volunteers - from children to grandparents, including Senior Pastor Dean Monkemeier - joined hands and opened hearts in staffing five production lines, each assembling thousands of flavorful, nutritious meals for local hungry families. Although they easily reached their quantity target - an impressive 15,000 meals - the volunteers primarily focused their attention on quality. Observing strict food safety protocols, they gowned in aprons and hairnets, disinfected their hands, and wore gloves. Meals were prepared from bins of fresh pasta and soy protein; cheese packages fortified with protein, nutrients, and vitamins were added; and the packages were carefully weighed, heat-sealed and then packed into boxes. But they had fun as well. Once the boxing was complete, volunteers paused to cheerfully roar in celebration for their gift of life to those in need. Smiling - and in some cases, singing - volunteers reflected both grace and the obvious bond of community that characterizes this loving and life-affirming congregation.

Meals are being distributed to local children and families through community-based soup kitchens and pantries. Western Springs Baptist Church (www.westernspringsbaptistchurch.org) is an unaffiliated Baptist church with a strong scriptural and evangelical emphasis. Its congregation is diverse in its background and traditions - focusing on those things which unite evangelical Christians rather than on those which narrowly divide. The church strives to be a friendly, caring community of believers that functions as a family. It has ministry for and by all ages with cross-generational interactions. It seeks to strengthen and support the families within its congregation through its ministries and programs, including such community outreaches as meal packaging and distribution.