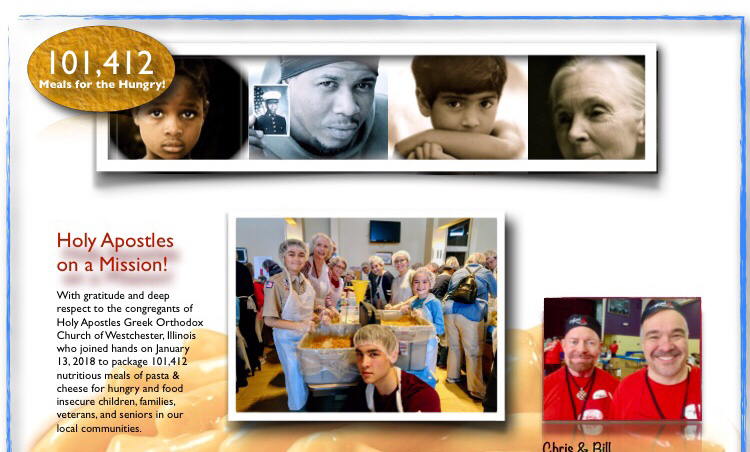 On January 13, 2018 Holy Apostles Greek Orthodox hosted their second meal packaging event. Last year they packaged over 68,000 meals and set the bar this year by topping over 100,000 meals. The final count with the help of nearly 500 hundred volunteers was 101,412 meals of Macaroni and Cheese fortified with soy protein.

From the very young to very old, regardless of size, infirmity, or condition, these volunteers put on aprons, hairnets, and gloves, and joined hearts and hands in producing nutritious, flavorful meals specifically designed to nurture bodies and lift spirits.

While food safety and quality were emphasized during the video and hands-on-training, the experience is designed to be spirited, enriching, fun, and is for many, transformative. Volunteers formed into production lines, assembling meals from bins of pasta and soy, adding cheese packages, and carefully weighing, heat-sealing and then packing into boxes. And when the boxing was complete, joining in a throaty cheer to celebrate their gift of life to those in need.

These meals were donated to the Greater Chicago Food Depository where they will be distributed in partnership with over 700 agencies and programs including pantries, soup kitchens, shelters and responses for children, older adults and veterans. This network distributes food where it is needed most throughout Cook County.

Thank you Holy Apostles for being a major part in helping to end hunger.